Ever heard of Proton Ventures? We have. Since many years, Kanon and Proton have been working together in the field of ammonia storage. This is not spectacular in itself, until we start taking a closer look at this cooperation.

Hans Vrijenhoef, founder and major investor in Proton Ventures BV and its affiliates and participations (such as NFuel Technology ltd, Ttranshydrogen Alliance and Battolyser Holding BV) is the one person in the Netherlands who does not see ammonia as a chemical product, but as a fuel. The new fuel of the future, without CO2 emissions or even NOx emissions and particles.

Hans Vrijenhoef, also one of the initial members in the Ammonia Energy Association (New York), is passionate about the possibilities for using green ammonia as the new fuel of the world. Call it the new oil, but fully green.

Green hydrogen in a transportable mode

Ammonia, if produced from solar, wind or hydro, is an ideal way to convert green hydrogen in a transportable mode.  A method to store hydrogen and to bring hydrogen (in ammonia form) to the end users of either hydrogen or ammonia. The ‘Cracking technology’, which was already used in the mid 1980’s can be used to crack ammonia and make hydrogen. However, with this full supply chain of technologies it becomes easy to produce ammonia using solar, wind and geothermal sources , by pouring power into ammonia via electrolyses, which has already been a proven method for close to 100 years.

Hans Vrijenhoef combines all technologies and currently produces green ammonia in Morocco, Oman and Brazil, among other locations in the world. All this (green) ammonia is meant for Europe, either as hydrogen or green ammonia as a renewable chemical or green fertilizer.

Proton is not the only one bringing green ammonia to Europe, but together with Kanon Loading Equipment, Proton will be the driving force for selling more of Kanon Marine Loading arms and/or Railcar and Truck Loading Arms.  Because of product shipment from the production location to Europe in sea going vessels and later in rail cars or trucks for inland transportation in Europe.

Green ammonia as a bunkering fuel

This new market is now taking off, with large production plants having been announced recently, including those of the Transhydrogen Alliance, for which Proton is a part of the initial investor group.

The development of green ammonia engines, making it possible to use green ammonia as a bunkering fuel  as well, will open up more applications for ammonia. Also, multiple bigger or smaller storage facilities will be built worldwide, offering a vast market for Marine Loading Arms.

Having the long lasting relation between Proton and Kanon, we look forward to continue working  close together to deploy many state-of the-art (Marine) loading arms in this fast growing market. 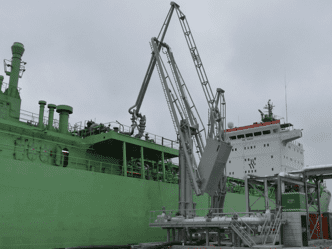 Partnership transcends providing the best loading systems. Our low-maintenance loading arms are complemented by a dedicated service team. We strive to enhance your loading arm maintenance strategy and is dedicated to offering you sound advice on how to best implement loading arm services.